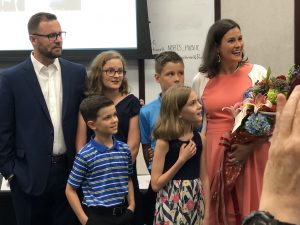 Sometimes we don’t know the good things which are all around us. One of those is New Orleans Seminary, an institution that I’ve had the joy of being associated with for all of my adult life.

Martha has a masters degree from New Orleans seminary and I have both a masters and a doctorate. We have been forever influenced by those Godly professors who helped us grow in the Lord and prepared us for a lifetime of ministry.

That’s why I am excited about Dr. James Dew. Jamie (as he is known by his friends) has two PhD‘s, one from Southeastern Baptist Theological Seminary and one in philosophy from the University of Birmingham, England.

For the last seven years he has been Dean of The College at Southeastern where the enrollment has over doubled in those years. Prior to that he served as a pastor in North Carolina for eight years

Jamie and his wife Tara have two sets of twins, 11 and 9 years of age. They are a beautiful family and will bring a new perspective to New Orleans Seminary.

This announcement is important to all of us—even non-Baptists— because of the vital role that pastors and ministers play in the work of the church.

Let this announcement be an impetus to pray for your church, its pastors, and those in your denomination who help train the next generation of leaders. Pray that God will continue to equip and grow those who lead the church.

Praying for the President

The Privilege of Prayer