Do You Trust Your Beliefs Enough to Take a Bullet? 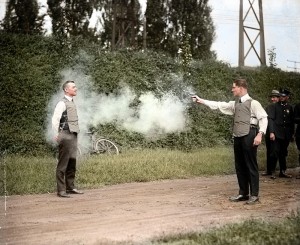 Recently, someone from our church sent me a wonderful file of recolorized photos. They were amazing and fascinating.

Sometimes when I receive something like this I wonder if I really have time to look at a long list of photos, but I couldn’t put them down. The folder included all kinds of people I knew, such as Helen Keller, Charlie Chaplin, Babe Ruth, Marilyn Monroe, Winston Churchill, and Elizabeth Taylor. It included photos of war and warriors and one of the crash of the Hindenburg.

The most fascinating picture of all was  the picture at the left. It’s a picture of W.H. Murphy testing the bulletproof vest. He invented this vest. I suppose he’s the guy being shot instead of the guy doing the shooting!

I simply couldn’t take my eyes off this picture. The trust and belief meant everything.

W. H. Murphy staked his life on his belief in his invention.

We are all staking our future on our beliefs.

You may think I’m writing about Christians who put their future in the hands of Christ. I am writing about that, but I am more so writing about those who don’t believe in Christ. W. H. Murphy received two rounds from a .38 caliber revolver. The onlookers, mostly police officers, said that “he didn’t bat an eye.” He didn’t invent the bulletproof vest, but he improved the concept. He believed in it enough to put his life on the line.

How much do you believe?

As we approach the celebration of the crucifixion and resurrection, we need to remember that Jesus took a bullet for us, but not with a vest. The apostle Paul described it this way: “God made him who had no sin to be sin for us, so that in him we might become the righteousness of God” (2 Corinthians 5:21).

Where are you placing your trust? Are you able to say, “Because of what Christ did on the cross and because of my faith in Him, I know I have received eternal life and will live with Him forever?”

Are you willing to “take a bullet” knowing you belong to Him?

Easter should be a time when we look at our lives and recognize God did a great work that we might be redeemed and brought into His kingdom.

I write a devotional everyday. If you would like to receive your own copy each morning, please sign up for your free copy at waylonbailey.com. There is no obligation on your part.

What Would Jesus Do in a Pandemic?

I am Concerned, and I am Encouraged